The Panama Papers Leak: how to respond in a crisis

In April, the leak of the Panama Papers from Panama-based law firm Mossack Fonseca led to large-scale media coverage.

In what has been called one of “biggest data breaches” in history, an unprecedented 1.1m files from Mossack Fonseca’s database were leaked by an anonymous source. The documents named multiple banks such as Commerzbank, Deutsche Bank, Credit Suisse and Royal Bank of Canada among others, implicating them of illegal activities in the world of offshore business.

With the growing magnitude of the leak relating to tax avoidance and in light of the accusations put forth from journalists pouring through the contents of the Panama Papers, alva analysed over 12,420 pieces of publicly-available global content in order to understand the impact of the leak on the corporate reputation of the banks.

Some of the questions we sought to answer were:

How has the Panama Papers leak impacted banks?

All banks in the peer group comprised of Credit Suisse, RBC, Commerzbank and Deutsche Bank generated negative scores for content related to the Panama Papers. Of the four companies, Credit Suisse and RBC generated the least negative scores, largely due to national and local media coverage of both banks “denying and dismissing” tax avoidance allegations. Credit Suisse’s CEO Tidjane Thiam gave a statement “a day” after the leak, saying the bank was only “after lawful assets”, thereby mitigating negativity towards Credit Suisse. RBC’s director of communications, Tanis Feasby said the company had “established controls, policies and procedures in place” to detect and prevent tax evasion. Although all companies were negatively impacted as evidenced by their sentiment scores, Deutsche Bank and Commerzbank were impacted more severely than RBC and Credit Suisse as they performed below the peer group average of 5.19*. 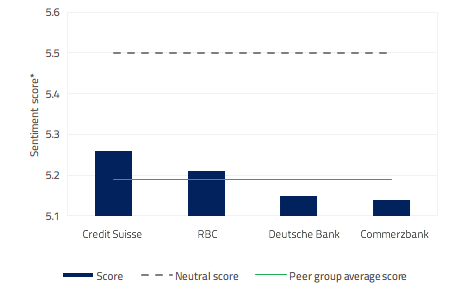 What kind of coverage volumes did the Panama Papers affected banks get?

Of the four banks, Credit Suisse received the highest volume of coverage regarding its mentions in the Panama Papers’ findings, as seen in Fig II, with many references to the bank being “thrust into the limelight” of conversations regarding tax evasion. Credit Suisse generated the highest volume as it was referenced for being “embroiled” in allegations of “actively using offshore structures to help clients cheat on their taxes”.

Royal Bank of Canada received coverage for “denying” alleged wrongdoing after being named in the Panama Papers. Specific references to Deutsche Bank utilising “more than 400 offshore companies till 2007” and Commerzbank being one of the banks that allegedly tried to “evade taxes” generated negativity as well. 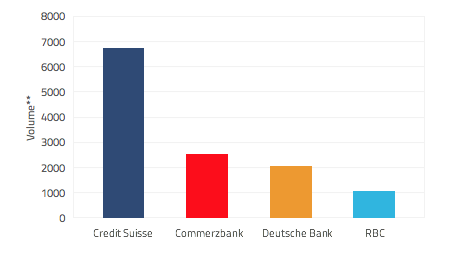 Furthermore, what is most interesting from the chart below (Fig III) is how much coverage Credit Suisse received in regards to its alleged involvement in the leaks, from social media and local coverage, the highest across all media sources. Credit Suisse received blog coverage of its CEO defending the bank’s alleged tax evasion accusations, while Twitter conversations around Credit Suisse being one of the British banks that supposedly “helped the wealthy and 1% evade taxes” generated negativity.  RBC generated blog coverage of being “exposed” in the Panama Papers and Twitter conversations around “setting up a team to scrutinise” the data exposed in the papers. 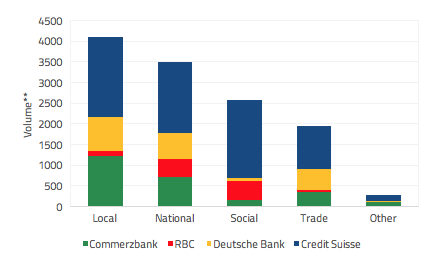 What variables affect brand sentiment towards banks impacted by the leak?

Fig IV. Share of executive mentions in relation to the Panama Papers volume for each bank 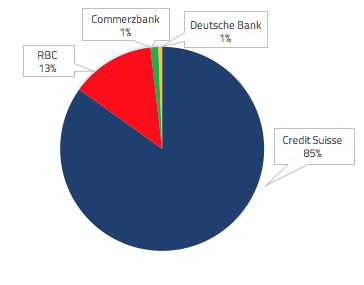 One of the variables that impacted sentiment across the four banks was the inclusion of executive mentions alongside coverage of the Panama Paper. Fig IV shows that Credit Suisse had the highest volume of coverage of its CEO Tidjane Thiam, discussing how the bank does not endorse offshore accounts for tax avoidance. Tidjane Thiam’s comments regarding the company only accepting “structured vehicles if they serve legitimate purposes” helped lift its brand sentiment score in comparison to the other three banks. As such, Credit Suisse benefited by “dismissing” the allegations and “defending” itself, supported by executive statements. RBC’s Tanis Feasby’s comments about RBC having “high standards” to ensure none of its clients are evading taxes helped to mitigate negativity. On the other hand, Commerzbank and Deutsche Bank had the lowest share of executive voice, and as such were negatively impacted by the Panama Leaks due to less coverage of executive defence and intervention.

*Sentiment scores are on a scale of 1-10, with 5.5 representing a neutral score. A score of above 5.5 is positive, while a score below 5.5 is considered negative.

**Volumes are used covering the period between April-May 2016.

Which airlines have the best reputation for customer service?