How is Volkswagen reputation after emissions admission scandal?

The drop in VW’s share price, its potential legal liability and resultant government probes are material risks which have been amply covered in reporting on the issue so far.

Where there has been a lack of real insight is on whether the issue itself will ultimately affect customer purchasing decisions.

There have been reports of existing customers looking to sue the company and customers criticising their perceived betrayal at the hands of VW. However, these have been little more than anecdotal and focus more on the existence of negative sentiment towards the manufacturer rather than seeking to understand whether the issue has fundamentally re-shaped customer attitudes to the point that sales will be significantly affected. Where there has been a lack of real insight is on whether the issue itself will ultimately affect customer purchasing decisions.

How is Volkswagen brand perception after scandal?

This media analysis report seeks to answer the following questions:

1) Is this an issue for customers?

The first question to answer is whether emissions fraud is seen as an issue for customers.

Reputational risk can be defined as follows:

Three things determine the extent to which a company is exposed to reputational risk. The first is whether its reputation exceeds its true character. The second is how many external beliefs and expectations change, which can widen or (less likely) narrow this gap. The third is the quality of internal coordination, which also can affect the gap.*

When assessing how much of a reputational risk an issue is for an organisation, we must always take into consideration what the company’s promise to its stakeholders is, what their expectations of its behaviour are and the degree of misalignment between the two.

This is why, for example, our recent stakeholder intelligence showed that the Amazon workplace issues reported in the New York Times were not a significant reputational risk from the consumer perspective; employee treatment is not a brand promise made by Amazon to consumers and it is not an issue that is a high priority for this stakeholder group. Sales for Amazon, therefore, remained unaffected by the story.

For VW, the story is very different.

In the lead-up to the emissions revelations, alva analysed all social media content using our proprietary Social Media Advocacy** measure. This metric is designed to analyse favourable and unfavourable recommendations of a company’s brand and products & services, as well as the user’s intention to buy. 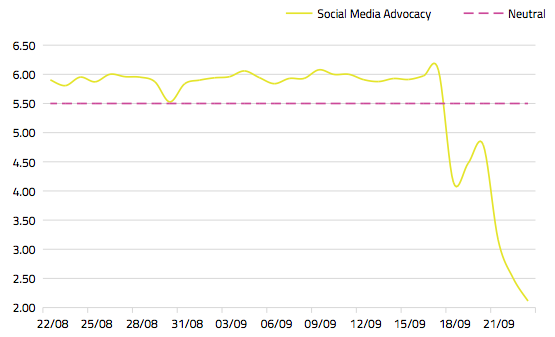 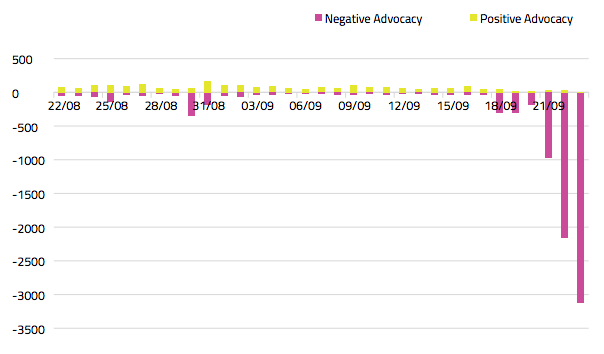 What we can clearly observe here is that positive recommendations of VW – which had been healthily consistent at an above sector average +80 – dropped by an average of 67% post the emissions scandal.

This means that each day following the emissions revelations, there are an average over 1,100 more detractors than advocates for VW on social media – that’s 1,100 people every day attempting to dissuade other people from buying VW’s products.

2) In what way is this causing reputation damage and affecting customer perceptions of VW?

As well as understanding this Advocacy at an aggregate level, alva’s SMA approach can also be used to pinpoint the drivers of Advocacy, both favourable and unfavourable. In the below graphs, we have pulled out three such examples of customer Advocacy drivers to illustrate how these can be used to assess the impact of the issue, as well as to better steer medium-to-long-term company reputation rebuilding efforts.

Pre-emissions, VW netted positive Advocacy across the below three drivers, with Quality the company’s key differentiator and biggest Advocacy generator. 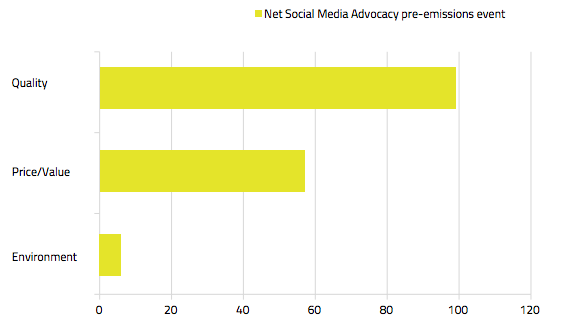 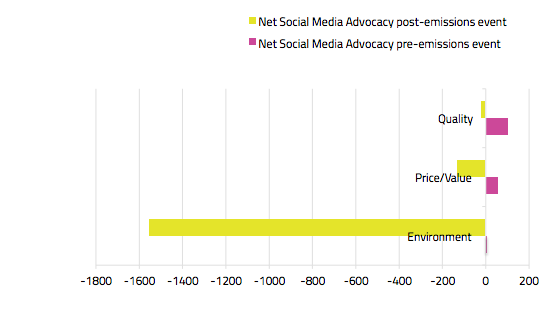 After the emissions scandal revelations, we can see a very different picture, with all Advocacy drivers having moved into negative territory to a greater or lesser extent. This is indicative of a reverse halo effect in which a negative emotional response to a company due to an erosion of trust spills over and clouds the rational judgement of all of its traits.

Looking in more detail at the changes in Advocacy drivers pre- and post-emissions revelations we can identify some interesting qualitative differences and use these to model potential response strategies.

Environmental benefits were not a key determinant of VW customer Advocacy and purchasing decisions pre-emissions event. However they are now a key source of reputation damage and a negative differentiator with people dissuading others from purchasing a VW on environmental grounds.

Positive Environmental differentiation is therefore clearly not an option for VW at the moment and efforts to address this are likely to lack credibility in the short-term, while potentially risking derision among customers and the public at large.

Price/Value was a positive driver of Advocacy for VW prior to the event, however, customers are now less convinced of the value for money represented by VW’s models.

Behind this lies concerns about the potential resale value of the company’s models in the second-hand market. Toyota managed to maintain strong growth in its Prius model in the US in 2010 despite the significant reputational damage from its unintended acceleration lawsuit and fines. One of the tactics credited with helping Toyota emerge from this difficult period was its focus on incentives to ensure that it leveraged its previously strong brand appeal to entice customers with lower prices. Indeed there is a sizable minority of comments on Twitter which indicate potential customer excitement at an anticipated decrease in the price of VW models, making them more affordable to a wider range of potential buyers.

Quality, the hallmark of VW’s product offering pre-emissions, has been the least affected of its Advocacy drivers and while this is now marginally negative, perceptions of the company’s Quality remain strong overall.

For VW, therefore, the good news is that its reputation for Quality with customers is less affected than it might have been. This is a bulwark for the company and an area that it could leverage as a reputation opportunity once the fallout from the emissions issue has passed. Indeed, as discussed regarding Price/Value, high perceptions of Quality allied with anticipated lower prices may in fact entice many new customers to VW’s products in spite of the reputation damage suffered by the organisation.

3) What does all this mean for Volkswagen?

As social media becomes an ever more frequent and important research tool for consumers looking to make purchasing decisions, online recommendations from other consumers – ‘people like me’ are now valued as much as advice from online experts.

What is key to bear in mind whenever analysing concepts like corporate reputation is that there is never a direct 1:1 link between shifts in stated intentions and actual stakeholder outcomes. Furthermore, the company always has a role to play in responding to these shifts which may result in a positive outcome despite a negative initial stated intention.

By understanding clearly what the key determinants of customer Advocacy are and where it out – or underperforms – these expectations, companies can offset perceived weaknesses and reputation damage by dialling up strengths in other areas.

From analysing the drivers of VW’s customer advocacy we can, therefore, surmise the following:

You can read Volkswagen scandal case study and download it.

** Social Media Advocacy is the favourable or unfavourable recommendation of a company’s brand, products and services via the medium of social media. This is achieved through the analysis of hundreds of words or phrases that when used in social media indicate Advocacy, be it positive or negative. This would include active endorsement or favourable comparison of a company’s products and services as well as antagonists seeking to dissuade others from becoming a company’s customer. For more information on alva’s methodology please contact us.

Which are the top 3 pharma companies for efficient business?