Alongside the drop in commodities prices, the mining sector has been faced with a great many staunch and vocal antagonists over the past year. Restructuring has led to negativity around job losses and increased fears around the safety of tailings have been driven up by the Samarco dam collapse in Brazil. A good reputation with key stakeholders is key to maintaining license to operate and investors are increasingly taking into account a wider range of issues for investment decisions in such capital-intensive industries as mining.

What influences perceptions of the mining industry?

The graph below (Figure. 1) shows sentiment for some of the most pertinent industry issues that the International Council on Mining and Metals (ICMM) has identified as having the most pronounced influence on the mining industry’s key stakeholders. alva sought to understand the relative influence of these issues and, working with the ICMM, analysed all publicly available global content in English language over the last 6 months to do so [i]*.

The graph shows by what percentage an issue has either held back or actively improved sentiment towards the mining industry, demonstrating that at least between September 2015 and February 2016, the industry was faced with a long tail of highly negative issues and few net positive drivers. It must be noted that within each one of these issues there are both positive and negative issues. However, what alva and ICMM sought to understand here was the net impact of the issue, and thus determine the issues that are most critical to improving wider societal acceptance of mining. 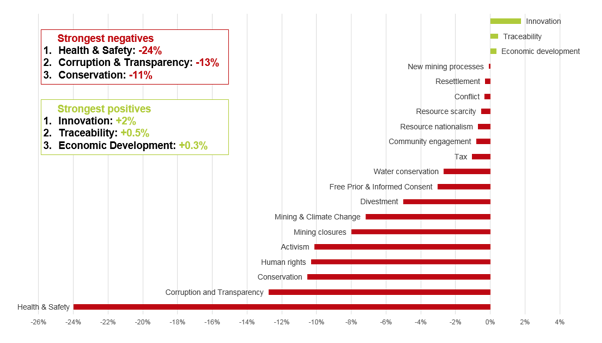 What can the mining industry learn from this analysis?

From this we can learn that successful resolution on silicosis lawsuits and improvement in occupational safety are likely to have the biggest impact in improving overall perceptions of the industry.

Sentiment around conservation decreased to an impact of -11% (from -8% in the previous period – see Fig.2), trending to its lowest point in November 2015 due to the Samarco dam breech. The issue raised the profile of tailings safety as an industry priority and demonstrated the effect a single event can have on wider perceptions of an entire industry.

Figure. 2: Sentiment trend showing overall perceptions of some of the mining industry’s most negative issues between September 2015 – February 2016 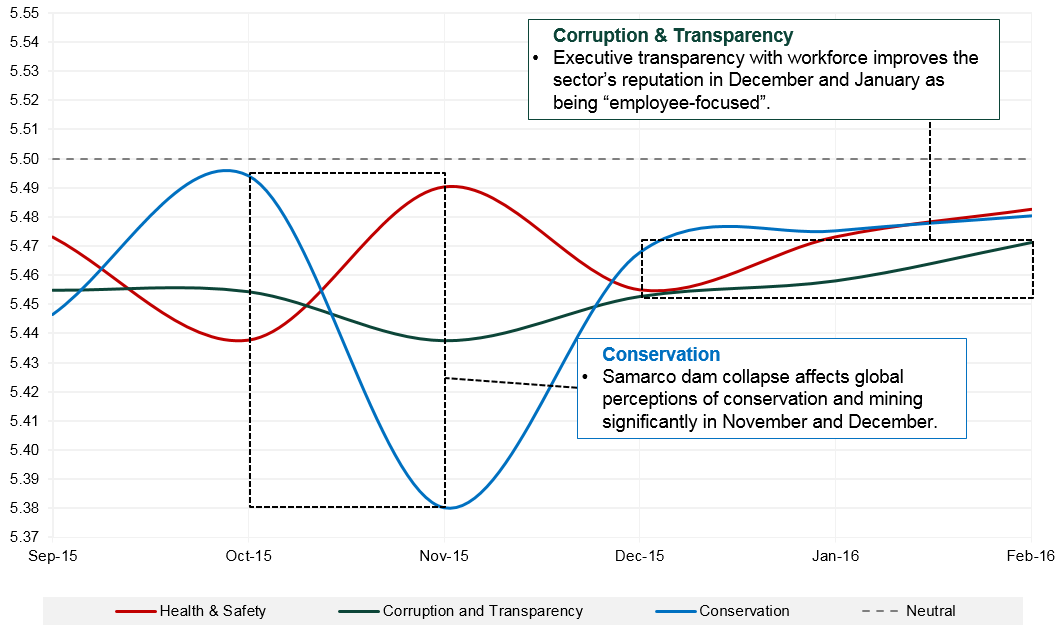 Corruption and a lack of transparency are legacy criticisms often levied at the sector. However, negativity around the issue decreased from November 2015 – February 2016 (Fig. 2). The primary driver of advocacy came from employees, with praise at South 32 for executives being more transparent around decisions and communicating outcomes effectively. For the rest of 2016, the level of restructuring within the sector likely presents an opportunity to utilise this approach to build greater goodwill with employees.

What does this mean for the future of the mining sector?

In conclusion, for an industry beset with financial and reputational challenges, a good reputation with key stakeholders is increasingly important to maintaining license to operate.

The shift in the media landscape to online and social channels has increased the importance of a broader range of stakeholders and the issues discussed above – health & safety, corruption & transparency and conservation – are some of the strongest issues holding back societal acceptance for miners.

Although the industry generates some key redeeming factors around innovation, traceability and economic development, dealing with the sector’s biggest risks is likely to remove some of the key obstacles standing in the way of the mining industry building trust with wider society.

*alva is conducting analysis of external perceptions of the mining sector in conjunction with ICMM on an ongoing basis. If you would like any further information on this subject, or any of the other issues analysed by alva in the mining sector, please contact Chris Cleves on chris.cleves@alva-group.com or call +44 203 735 9786.

[i] alva’s analytics engine captures and analyses discussion in English language media of any one of the issues listed in conjunction with ICMM members (comprising the many of the largest mining companies in the world), analysing the language to determine how positively or negatively a company is portrayed.

Help to Buy ISAs: which banks are benefitting most?