Earlier last month, on the 15th of January, BT’s £12.5bn takeover of EE was approved by the Competition and Markets Authority (CMA). Just two days later, news broke that Three’s attempted takeover of O2 “will face a major hurdle in Brussels” as the European Commission is expected to demand harsh concessions, such as forcing Three to sell off network capacity to competitors.

This follows a pattern throughout Europe. In France, Orange and Bouygues Telecom are currently in talks about a merger. Last year, two mobile operators in Denmark attempted to consolidate but withdrew their plan following costly concessions from the European Commission. Germany, Austria and Ireland have also seen telecoms consolidation in the past few years.

Following this trend, the UK and Europe may well see other consolidation attempts in the sector. As companies face tremendous regulatory scrutiny when attempting a merger, key stakeholders such as the media and regulators will ask how will a merger impacts consumer prices, network investment and jobs. All of these issues present their own challenges to manage from a communications perspective.

alva recently sought to answer what the key reputational risks associated with consolidation in the telecoms sector are, and in doing so analysed all publicly available media content from BT, EE, Three and O2 going back to June 2015.  The scope of the analysis is detailed in the table below.

The graph below displays issues affecting stakeholder sentiment towards consolidation in the telecoms sector from June – December 2015. The bars represent the content volumes on the left axis and the diamonds represent the reputation impact on the right axis. The data is compiled from algorithmic analysis of over 15,000 articles in the telecommunications sector.

Figure 1: Volumes of content for each issue analysed, overlaid with an indicator of that issue’s reputation impact* 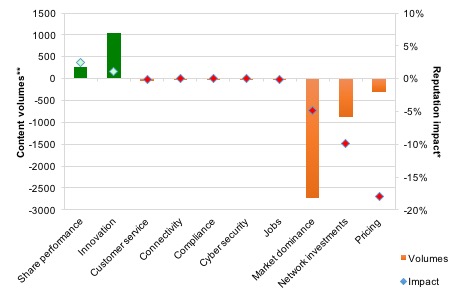 The graph above indicates that the three areas that generate the most negativity for companies attempting consolidation are pricing, network investments and market dominance. The key events driving sentiment behind these themes are outlined in more detail below.

Interestingly, pricing represents the biggest risk associated with consolidation despite having a smaller amount of content than the other two key risks. This indicates that the issue of pricing is highly negative, but that consumers aren’t talking that much about what will happen to prices, at least not yet. Margrethe Vestager, the European Commissioner for Competition, cited concerns about consumers paying for consolidation with higher prices when demanding conditions in order for the merger of Danish telecoms companies Telenor and TeliaSonera to go through. The European Commission similarly voiced concerns that the proposed merger of O2 and Three “could lead to higher prices”. For telco companies, pricing presents a key risk to consolidation as stakeholders, including regulators, the media and consumers, question how reducing the number of companies in an industry will impact prices for consumers.

Network investment is often argued by proponents of telecoms consolidation to be the main benefit, as a larger organisation will have access to greater resources, allowing it to spend more on investing in and updating the telecommunications infrastructure. However, alva found that for the companies analysed, this issue is actually a primary driver of negativity.

Sharon White, a key influencer of opinion within the sector, said in a speech that research seems to suggest that a reduction in the number of players does not lead to more investment per subscriber. Similarly, critics of the BT/EE merger expressed concerns to the CMA about how the deal would impact the supply of fibre lines between phone masts. Effectively managing communications around network investment is therefore a key priority in maintaining reputational capital throughout a period of consolidation.

Market dominance is a key concern to competitors in the telecoms sector and the impact of rival CEO statements on media sentiment has been significant in determining the reputational positions of the companies analysed between June – December 2015. This issue generated the largest volume of content over the period, with noise coming from competitors and regulators. Despite this, it was not the most negative issue as the BT/EE merger was cleared by the CMA on the basis that it did not present a threat to competition since the companies currently supply different categories of communication services.

The fear consistently raised is that if a new consolidated company has a significant market share, they will have power over the market that rivals cannot compete with. BT’s rivals raised this concern as, together with EE, the consolidated company would own a substantial portion of the airwaves used for mobile networks, an important resource in a market where demand increases by “as much as 70% per year”. Ownership of the infrastructure has also been argued by Ofcom as a potential incentive to discriminate against other mobile providers. Vodafone also opposed the merger, saying “the combination of the UK’s dominant supplier of digital fixed infrastructure, upon which all other providers rely, with the largest mobile operator, would have a negative impact on the market and services available”. Clearly, concerns about market dominance must be addressed to ensure broad-based support from both regulators and the media in attempting consolidation within the sector.

With the trend for consolidation within the UK and European telecommunications market comes increased scrutiny and an increased risk for reputational damage. Through analysis of 7 months of content discussing M&A activity in the sector, alva has identified the three biggest reputational risks to manage from a corporate affairs perspective in the telecoms sector. In order to mitigate negativity and protect reputations amidst considerable scrutiny, companies will need to carefully consider their approaches to writing a narrative around these main themes:

Managing these reputational risks is important for maintaining positive sentiment among key stakeholders, but can also protect against reputational damage that could be incurred in the consolidation process, even if the regulator gives the green light.

This is an excerpt of a fuller analysis of the reputational risks within the Telecoms sector. Please contact us for further information on how reputation intelligence can identify risks and opportunities for your company.

* Reputation impact represents the contribution of each issue to sentiment towards the subject of consolidation in the Telco sector. For example, concerns around Pricing increase negativity towards Consolidation by 18%

**Content volumes represents the total number of individual pieces of coverage (print, online, Twitter etc) for each of the issues tracked

What are the reputational risks associated with clinical trial transparency in the public sphere?