On 1st of February 2016, easyFoodstore was launched – the first budget supermarket in London selling everything for 25p per product. easyGroup outlined that the supermarket is a trial in order to test item sales and the concept of the shop itself throughout February. It is believed that easyFoodstore could successfully compete with major players in the market of budget supermarkets, including Aldi and Lidl. However, according to an easyGroup spokesperson, commercial success depends on the public response and whether there is clear demand for “these goods and this shopping experience”. In this analysis, alva sought to answer the following questions:

What was the initial media reaction to the launch of easyFoodstore?

The first reaction in mainstream media after the launch of easyFoodstore was positive, with major sources including The Guardian and Reuters highlighting the “ambitious” idea of easyGroup to launch a trial and fill the niche in the market between food banks and budget supermarkets. At the same time, there was a level of scepticism in national and trade media as retail analysts raised concerns regarding the location and range of food available. Moreover, easyGroup stated that after the trial period prices will be increased to 50p. Hence, there are uncertainties in terms of the ability to maintain the shop’s perception as “the cheapest supermarket” in London.

Beyond this, coverage mentioning the launch of easyFoodstore reached its highest peak on 3rd February when easyFoodstore was forced to close after it ran out of stock due to “overwhelming” demand. In mainstream media the event was largely presented as a positive as it was believed to indicate that the trial launch of the supermarket had been successful. 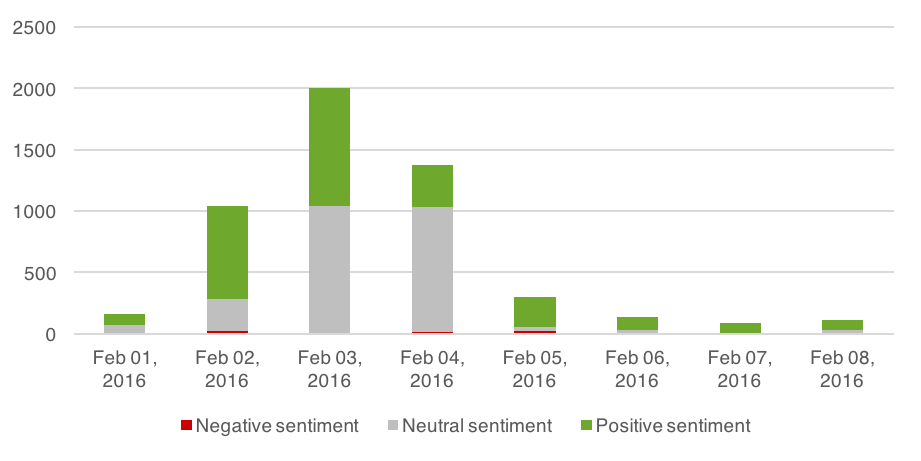 What do customers currently think about easyFoodstore?

The customer response has been largely positive towards easyFoodstore. The majority of Twitter users discussing the outlet were pleased with its prices, which are significantly lower than those of its competitors. Furthermore, customers were also happy with the idea that easyFoodstore could help support poor families and communities, thereby presenting easyFoodstore in a social and community-spirited light.

On the negative side, there is a reported “high” price for the benefits provided by easyFoodstore. In particular, many customers were worried about the quality of service and food, with these two categories accounting for 85% of negativity. Customers mentioned that the food stock is not very good for a healthy diet, due to lack of fresh food, including milk, vegetables and fruits. In addition, some issues that dampened customer experience included the remote location of the store and inconvenient opening times, especially for people who work full time.

Future of the easyFoodstore concept?

Overall, then, the response to easyFoodstore has been positive both in mainstream media and social media, with high demand and intent to visit expressed particularly on Twitter. From our initial analysis, the key elements for the company to focus on with the re-opening of the store are:

Campbell’s and GMOs: a case study in consumer engagement