The health secretary Jeremy Hunt has asked the competition watchdog to investigate accusations that drug companies are “exploiting” the NHS to raise their prices. The claim is that the use of loopholes has resulted in a price rise of over 1,000% for 32 drugs over the past 5 years. This follows concern from within the industry over the issue as the Royal Pharmaceutical Society urged the Department of Health to “crack down” on “cynical and exploitative” pricing.

In this context, alva decided to examine if the issue has migrated into the public consciousness and why, by addressing three questions: 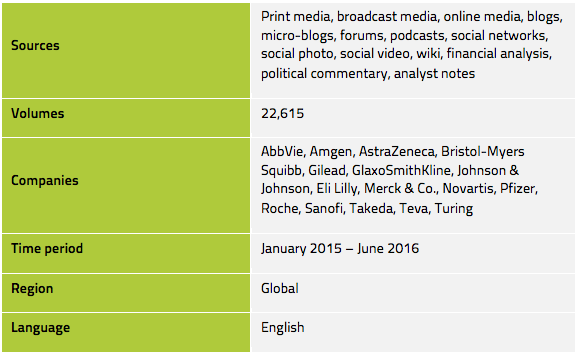 Figure i shows the total daily volumes of content related to drug pricing since the beginning of 2015 until June 2016. 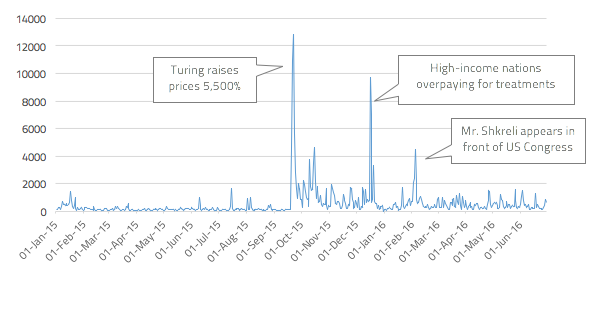 The major peaks within Figure i were sparked in response to Turing Pharmaceuticals increasing the price of the potentially life-saving drug Daraprim by 5,500%. Turing was launched by Martin Shkreli in February 2015, before acquiring the US marketing rights to Daraprim in August that year and then raising the price 5,500% the following month. This move resulted in extremely negative media coverage, including being called “the most hated man in America”.

But more interesting is the level of background noise. Prior to the 23rd September there is a relatively low “normal level” of references to drug pricing, but the price increase not only generated the largest spike in volumes, but also resulted in significantly higher volumes in the days afterwards.

There was also a call from experts on the 4th December 2015 for more global pricing transparency after fears some nations are “overpaying for treatments”, ensuring drug pricing remained of interest to the mainstream media. These two factors contributed to the level of background coverage of this issue apparently resetting to a new normal which is higher and more volatile than before.

Has mainstream media coverage translated into increased concern among the general public?

alva overlaid mainstream media volumes with the volume of content from social media to assess if mainstream coverage resulted in increased public interest and concern. 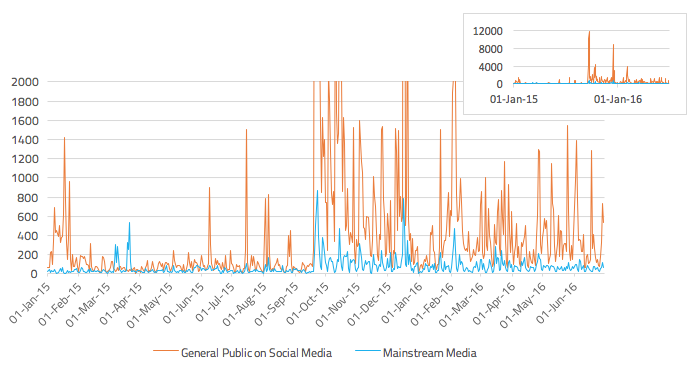 By reducing the scale to add emphasis to the background volumes, Figure ii shows the general public are remarkably sensitive to mainstream media coverage.

Mainstream media coverage does increase public concern around drug pricing, particularly in the aftermath of a “shock” event.

Do consumers target any specific pharmaceutical companies in particular?

Figure iii shows despite Turing Pharmaceuticals being a young and much smaller corporation than the established pharma companies, it was one of the top three most discussed firms for drug pricing via mainstream media. This in turn led it to be comfortably the most discussed pharma company by the general public on the pricing issue, garnering 23% of volumes. This demonstrates that pricing can be a highly sensitive issue to both mainstream media and the public, regardless of the corporation’s profile.

However, looking beyond Turing, we can see that despite the mainstream media largely focusing on Pfizer and Gilead, the public generally do not appear to target any one company in particular. Pfizer received 4% more public comment than third placed GSK, but companies between 2nd-8th for public discussions were closely grouped, accounting for 54% of discussions between them.

A further delve into the comments reveals that drug pricing doesn’t necessarily have to be a negative issue. GSK and Novartis were two examples of how the correct response to a negative issue can differentiate a company and result in a positive public response.

GSK’s CEO comments on reducing “drug price inflation”, and his move to let patents lapse (so as to allow cheaper generic forms of the drug to make treatment affordable in developing markets) was a large reason behind the company being the third most discussed by the public.  Similarly, the Novartis CEO’s call for “results based pricing” also resulted in positive coverage by the public.

The proactivity of CEOs in making these positive stories appears important. Gilead’s “blockbuster prices” for its Hepatitis C drug are compared unfavourably to AbbVie’s yet, interestingly, AbbVie does not receive a corresponding amount of positive coverage, indicating that positivity around the issue requires the proactive communication of positivity to the public.

Neither GSK nor Novartis featured highly in mainstream coverage on pricing, which suggests that the public have picked up on the positive stories off the back of negative coverage directed at their peers. This shows that while drug pricing has the potential for high media exposure, one company’s actions do not result in blanket negativity for the industry. In fact, there are good opportunities to build rapport with the public if senior figures at rival firms take a strong vocal stance against unreasonable price increases.

How are phishing attacks affecting the corporate reputation of banks?