“Fake News” was one of the most prominent phrases in 2016, with suggestions that it even had a significant influence on the US Presidential election. These accusations were initially refuted by Facebook, but alongside other companies like Google and Twitter, it quickly decided to remove advertising slots from fake news sites, and it has now introduced new tools to tackle the phenomenon.

The majority of the coverage around fake news has focused on its political influence, but this has begun to seep over into the corporate world. In the lead-up to the US Presidential election, Trump supporters called for a boycott on Pepsi products over a quote its CEO never actually made.

In order to uncover more about the potential damage fake news can cause, we analysed the response to the Pepsi incident to understand:

What effect does fake news have on Pepsi corporate reputation?

As this specific fake news story was very US-centric, we can analyse the immediate impact it had on Pepsi’s home market.

Figure i: Daily US sentiment score for Pepsi Q4 2016 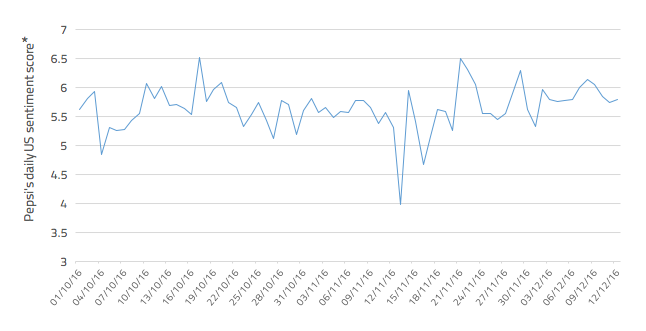 During Q4 2016, Pepsi’s average sentiment score was slightly above neutral (5.5*), indicating that the company was generally perceived positively in this market.

However, there is a clear dip on 13th November, which directly correlates with the publication of the fake quotes in a widely-shared piece on The Last Refuge. This trough represents a 35% fall below the average US sentiment score during Q4 and shows it was significantly ahead as the single most damaging incident for Pepsi.

This shows there was a clear impact on Pepsi’s domestic reputation, but how did the issue filter through to the company’s international reputation? 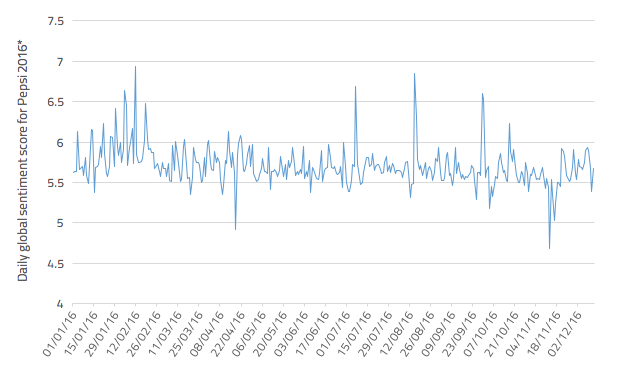 If we extend the timeframe to look at Pepsi’s global sentiment trend across the full year, it is clear that despite the fake news incident only relating to a political issue in one country, it was still the most negatively impactful event for the company throughout 2016. To put this into context, the second-worst dip in sentiment was on April 18th, when Pepsi announced their sales had fallen for the 6th straight quarter.

Due to the geographically targeted nature of the fake news incident, the global negativity on November 13th was softer compared to the impact in the US alone. However, the lowest point in Pepsi’s year was still 19.5% below the company average.

This shows that not only can fake news affect reputation, but it can also actually be the biggest single driver of negativity towards a company.

Can fake news impact on a company’s stock price?

We have seen that fake news can cause major reputational damage to a company, but how does this affect share price? 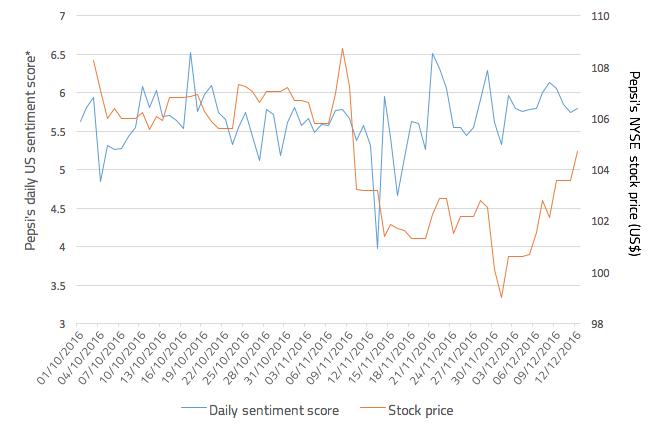 In the weeks leading up to the fake news incident, Pepsi’s stock price averaged around $106.58. Pepsi’s stock price took a significant hit on 10th November, the day the fake quotes initially started circulating. In the weekend that followed, the quotes were widely shared on social media, resulting in a further decline in share price when the markets re-opened on the 14th November.

In the weeks following the circulation of the fake quotes, there is a clear difference between Pepsi’s sentiment trend and its stock price. Sentiment towards Pepsi recovered well within five days, and its subsequent average reputation score has been higher than the months leading up to the fake news story.

This indicates that if it is quickly refuted fake news may not cause lasting reputational damage, but the subsequent impact on stock price can take longer to restore.

How should media monitoring and analysis companies treat fake news?

In a recent interview with Thomson Reuters, alva’s CEO Alberto Lopez was asked how companies can tell what stories are real or fake and how this factors into media monitoring and media analysis.

While it might be tempting to ignore or remove stories based on their lack of authenticity, the analysis above shows that they can cause as much, if not even more damage, than real stories.

The important factor is amplification. If a fake story is amplified, then it will still create a perception and provide confirmation bias for those with a fixed stance on a subject.

It is therefore crucial for corporations to understand the various stakeholder perceptions, both genuine and false, that make up their overall reputations. If these perceptions are based on false accusations, then the company can move to mitigate the damage by challenging the authenticity and potentially even gaining positivity by providing proof to the contrary.

It is also important for companies to be notified and respond quickly, as this can effectively restore reputation and potentially reduce the longer-term damage to stock price.

However, it is also vital for a company to be able to filter out the noise created by the less impactful fake stories, so they only focus on the content likely to cause damage.

alva achieves this by objectively scoring the sentiment of a piece of content, but also assigning the source with an influencer score. If it is from a traditionally trusted source, then it is likely to result in amplification and will be weighted as more important.

If a less established source is also displaying significant amplification, then this will boost the influencer score on this occasion to reflect the impact it is having.

This enables companies to understand which content has the most potential for influencing stakeholder perceptions of their brands, regardless of the accuracy of the source material.

By analysing the response to Pepsi’s fake news experience, it is clear that companies can experience significant reputational and financial damage from fake news.

While public sentiment towards Pepsi recovered well within a week, the impact on stock price is still evident over a month after the incident.

It is therefore important for companies to be aware of anything being said about their brands if it is receiving widespread amplification, regardless of its providence.

Companies therefore need to have the correct resources that can filter out the inconsequential content, highlight the trusted content sources, while also alerting them to the most impactful and dangerous fake news.

The alva algorithm calculates sentiment scores out of 10, where a score of 5.50 is considered neutral. The algorithm takes into account the volume, influence, prominence and relevance of real-time mentions from 80,000+ news sources, more than 3m blogs and forums, 100+ social networks. A score above 6.00 is considered strong, while a score below 5.00 is considered weak.