The last few years have been very difficult for the Co-operative Bank scandals.  Narrowly avoiding bankruptcy in late 2013 while at the same time also being hit by a scandal surrounding its former CEO Paul Flowers, causing significant damage to company reputation.

In mid-February 2017 the bank announced it was putting itself up for sale so we wanted to take a closer look at how these incidents impacted on Co-op Bank’s longer-term reputation.

If the Co-op has managed to hold up its positive image as an “ethical” bank, it will also be important to explore which financial institution would be a sensible choice for the acquisition in terms of commonalities in company culture.

alva analysed the Co-op Bank’s situation, in order to understand:

How has Co-op Bank’s reputation evolved over the last three years?

A merger with Britannia building society in 2009 was largely to blame for a £1.5bn “black hole” in the Co-op Bank’s accounts. As a result, the bank had to be rescued via a bondholder bail-out at the end of 2013.

We wanted to understand if this series of events caused so much damage to reputation that a sell-off was inevitable, or if the brand was recovering its reputation.

Fig I demonstrates how the bank’s financial woes dragged down sentiment scores at the beginning of 2014. In between the bouts of bad news, however, sentiment towards the bank kept coming back to neutral, momentarily even reaching positivity. Indeed, the trendline shows that, slowly but surely, the average sentiment score has improved.

As intervals between coverage on the 2013-related issues grew, the issue generally faded from the public agenda. Concrete occasions that boosted positivity included intermittent signs of optimism on its restructuring efforts, being spared further fines by the FCA, and an improved IT infrastructure.

Another driver of goodwill is the bank’s retention of its commitment to “ethical policies” and that it is still perceived as the “ethical bank”.

Overall, there was evidence that the bank’s reputation had been improving, but its average score across 2016 was still negative and it failed to rank among our top ten retail banks for the year.

Did the bank’s financial woes or the personal revelations about Paul Flowers cause the most damage to reputation? 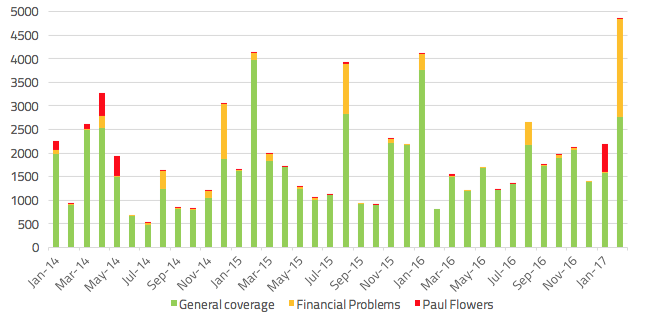 In the months following the Co-op Bank’s trouble, its capital situation proceeded to stir negativity, with weak financial results and repeated failures to pass the Bank of England’s stress tests.

While these events hurt the bank’s reputation, it is interesting that a lot of the early coverage focused on the scandal around its former CEO, Paul Flowers, who was caught purchasing illicit drugs in 2013. Flowers continued to make negative headlines, which led to the lowest monthly score for the Co-op Bank in April 2014. When Flowers received media attention, coverage also tended to regurgitate the bank’s earlier financial problems. Overall, Flowers’ negativity was concentrated at the beginning of 2014, as well as once more in January this year.

From mid-2014 onwards, the media spotlight was focused more on the Co-op Bank’s financial problems, especially in August of each year when the interim results were announced. In 2015 the interim results contributed to August being the lowest scoring month for the bank that year, but it didn’t have the same correlation in other years as was still only half as damaging as April 2014 when the attention was focused on Paul Flowers.

Most recently, the announcement that the bank is looking to be bought simultaneously led to a tremendous increase in visibility of the old issues, generating a renewed drop in sentiment.

Where does Co-op Bank positively differ from the Retail Bank sector?

With Co-op Bank actively looking for a buyer, speculation has turned to who would be a good fit. In order to understand the strengths of Co-op Bank and its potential reputation opportunities, we can compare how they are perceived on a number of issues, compared to the wider sector.

** A sample of 7 banks in the UK has been analyzed: Barclays, HSBC, RBS, Nationwide, Lloyds, TSB, Co-op.

Figure III highlights the damage to reputation that coverage of Co-op Bank’s Executives and Financial Performance has had, with much more negativity than the wider sector.

However, it is clear that the ethical positioning of the brand is much better than the sector. As well as this, although discussions around Co-op Bank’s local branches averaged out as slightly negative, it was less severe than the wider industry so there is a reputation opportunity around this issue.

The BBC business editor referenced these two aspects when he suggested that TSB, might be a good fit stating “whether the bank would want to take on the problems of Co-op is questionable but it [sic] terms of brand (both have a local and ethical flavor to them) it might work.” We can, therefore, compare the two issues to see if TSB is a good fit.

The results indicate that TSB has a good company reputation for Co-op Bank’s relative strengths. Looking at the data behind TSB’s brand image within the last three months reports around TSB’s socially responsible activities positively affected 17% of its overall media coverage, and were higher than the sector average. TSB could further improve its ethical reputation by leveraging Co-op Bank’s reputation in this area and pushing this as a reason for any purchase.

TSB has performed very well on local branches compared to the wider sector, with coverage on how it “presented a new campaign to bring local banking back to Britain by reconnecting with locals”. If it can incorporate Co-op Bank’s local branches into its portfolio and promote this as a widening of its efforts to reach its customers then it can also reinforce perceptions on this issue.

By analyzing the Co-op Bank’s reputation in the wake of its troubles, the following brand insights have become clear:

The scandal around its CEO had a severely negative impact and caused significant damage to reputation. These continue to be referenced a number of years later, demonstrating the crucial standing of executive performance in reputation management.

However, the reputation analysis clearly shows an upward trend in the Co-op’s sentiment score, though it was still struggling to achieve a positive score.

Co-op Bank’s main positive differentiator is its ethical reputation. Perceptions around its local branches were also less negative than the wider sector. These two factors were a good match with the TSB which had been put forward as one potential buyer.

* The alva algorithm calculates sentiment scores out of 10, where a score of 5.50 is considered neutral. The algorithm takes into account the volume, influence, prominence and relevance of real-time mentions from 80,000+ news sources, more than 3m blogs and forums, 100+ social networks.

Mining Indaba 2017 Review: Which mining companies had the biggest impact?