Mining Indaba 2017 Review: Which mining companies had the biggest impact?

Mining Indaba brings together the key players within the mining industry. It provides a forum for business leaders, industry experts and members of political organisations from across the world to share their experiences over the past 12 months, as well as look ahead to the challenges and reputation opportunities they believe will shape mining in 2017.

We have reviewed all publicly available content referencing Mining Indaba 2017 to understand the industry’s main concerns in order to provide businesses with strategic intelligence on the mining industry. This will enable them to make more informed decisions in 2017 on which issues represent the greatest risks and opportunities to corporate reputation in the mining sector and where to target their communications efforts over the coming year.

alva analysed which companies at the event were the most visible, which issues resonated the most, and finally, how the activities of those companies presenting were received by stakeholders in terms of sentiment. alva’s analysis sought to answer three questions: 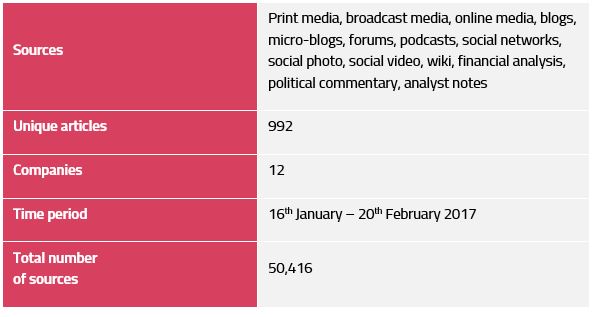 What were the top issues that resonated from discussions at the event?

At the heart of most discussions at Indaba was the current “tensions” between the South African government and mining companies. Mining companies including Sibanye Gold pointed to regulatory uncertainty, increased labour costs and frequent stoppages to explain why investment in the country is decreasing.

Underpinning much of the regulatory debate was the issue of indigenous ownership, as the South African government is soon to decide whether to impose legislation requiring mining assets to be 26% black South African owned, even after the original investors have sold their stakes. Consequently, the themes of indigenous ownership – and the regulatory environment more broadly – were the top issues discussed at the conference.

South 32’s President and COO Mike Fraser addressed the regulatory environment and the issue of black ownership in a conciliatory way: report headlines reflected his desire for “shared value” for all involved with mining. Mr Fraser went on to express the company’s commitment to increasing representation of black management and collaboration with black entrepreneurs. This positive communication, reinforced by “strong examples” of South 32’s black-majority workforce in South Africa contributed to a positive score for the company and Fraser himself (see Figures II and III).

Anglo American’s CEO Mark Cutifani may have listed Innovation, Resilience and Sustainability at the three key themes for his speech to the attendees, yet it was his comments surrounding the regulatory environment in South Africa that media reports claimed “set the tone” for the event. Mr Cutifani and South 32’s Mike Fraser were also the most vocal executives on the issue of water, a key resource used in mining and one whose scarcity is likely to be an industry talking point looking forward.

Which companies generated the most positivity at Mining Indaba in 2017?

Figure II shows that out of the 11 companies analysed, all but three generated a positive sentiment score at the 2017 Mining Indaba (5.50 being neutral). The company to generate most positivity was South 32, with 24% of all company content noting COO Mike Fraser’s emphasis on “shared value” for stakeholders in the speech he made at the conference.

The company which generated the most negative score was Sibanye, with 32% of the company’s content referencing the “tensions” between the mining industry and the South African government. Whilst CEO Neal Froneman’s speech gave greater media visibility to calls for change in the way that government engages with the mining industry, resulting discussion around Froneman’s comments lingered around the fact that the South African government had closed one of Sibanye’s platinum mine in September 2016 following a fatality.

Which executive contributions had the strongest impact on their company’s reputations?

The most visible executive speaker at Mining Indaba was Anglo American’s Mark Cutifani, whose address to the conference had three key themes: Innovation, sustainability, and resilience. Across all forms of media, 21% of content to mention Mr Cutifani referenced Anglo American’s 40% increase in productivity since 2013, and his desire to replicate these figures between now and 2020. 12% of content quoted Mr Cutifani’s comments made “on the sidelines” of the Indaba that the South African government must “stop the rot” – a reference to the perception that conditions for investment in South Africa are not conducive to stakeholder satisfaction.

Figure IV:  Most visible executives in conjunction with Mining Indaba

Neal Froneman, CEO of Sibanye was the second most visible CEO at Indaba, placing higher than Rio Tinto’s Bold Baatar, Randgold’s Mark Bristow and South 32’s COO Mike Fraser. Mr Froneman may have attracted increased media attention for his “combative” tone at the  awards, as he claimed that his company was “not going to tolerate” the actions of the South African government anymore. Sibanye is currently in the process of suing the South African government for $1.9m following the complete closure of one of its platinum mines last September.

Whilst shareholders may appreciate a senior executive who stands up for their company, overall sentiment for content referencing Mr Froneman was acutely negative, registering a score of 4.47. Reports referenced the fact that Sibanye was “in the dark” over mining regulation in South Africa, as well as the fatality that led to the closure of the aforementioned platinum mine. In terms of stakeholders, uncertainty around regulation drives negativity, while among employees and members of the public, a fatality at a mine is a key catalyst of negative sentiment.

The contrasting performances in terms of sentiment between Mike Fraser, Mark Cutifani and Neal Froneman show that visibility does not necessarily translate into favourable reporting: Mr Fraser achieved the highest sentiment score, despite achieving just 10% of the visibility of Mr Cutifani.

*The alva algorithm calculates sentiment scores out of 10, where a score of 5.50 is considered neutral. The algorithm takes into account the volume, influence, prominence and relevance of real-time mentions from 80,000+ news sources, more than 3m blogs and forums, 100+ social networks. A score above 6.00 is considered strong, while a score below 5.00 is considered weak.