2016 was another highly competitive year for the UK supermarket industry. For a number of years, the traditional giants in the sector have been under increasing pressure from the budget disrupter brands like Aldi and Lidl.
In order to get a detailed understanding of the issues that were driving both positive and negative perceptions of the industry, alva analysed all publicly-available content related to the UK supermarket industry throughout 2016.

This analysis seeks to answer: 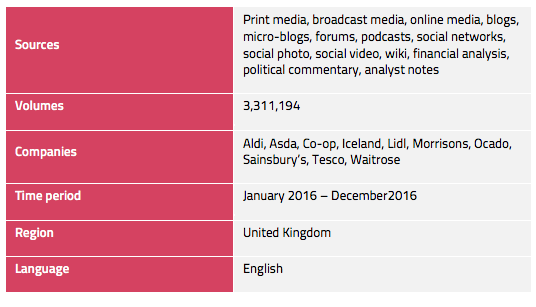 What are the top issues for the supermarket sector?

Figure I: Major issues for the supermarket sector ranked on sentiment against visibility 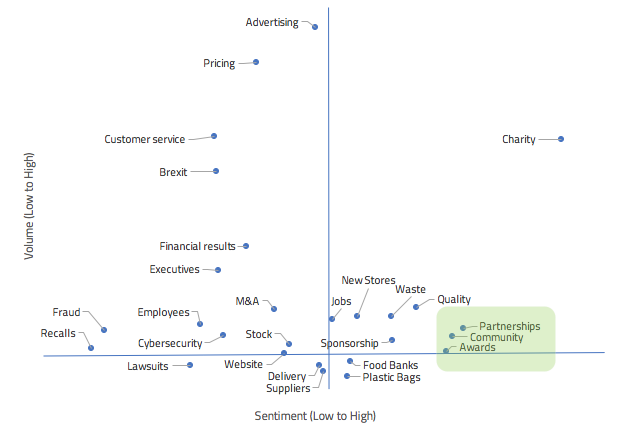 Unsurprisingly, offers received a huge volume of mostly positive content so we’ve removed this issue from the graph in order to highlight the variance within the other major issues. Charity also generated high sentiment and volume across the sector as most supermarkets effectively leverage this issue with national and local schemes.

Food waste and sponsorship were issues we have already investigated in-depth during 2016. You can read our sponsorship analysis here, and contact us if you are interested in a bespoke food waste report for your company.

The most prominent negative issues were things that might be expected to generate adverse coverage, such as recalls, fraud and lawsuits. Cybersecurity and Financial Results were also quite negative for the sector and we have also previously examined both issues in detail during 2016.

Two potentially inter-linked issues that generated high volume levels and appear on the negative spectrum are Pricing and Brexit. The supermarket price war has been a recurring concern for the traditional players over recent years, as the German supermarkets Lidl and Aldi have used it to increase market share.

This competitive pricing strategy initially continued following a sharp fall in sterling since Brexit,  but we are now starting to see the brands themselves forcing prices up as they respond to the impact of Brexit. One prominent example of this in 2016 focused on Marmite, with the “price battle” between parent company Unilever and retailers. The Head of Unilever responded by stating that Britain should get used to price rises after Brexit.

Finally, there were a cluster of positive issues which were not generating high volume (marked in green on the graph). We will investigate these in the next section, because if companies can successfully leverage coverage around these areas then there is the potential for generating strong positive returns.

What are the potential opportunities for supermarkets going into 2017?

We previously identified Awards, Community Initiatives and Partnerships as issues with the potential to drive positivity if companies can amplify their messages more. However, before putting a lot of focus on these issues, it is important to understand if they are themes which are still growing or if interest has peaked and they are actually in decline. 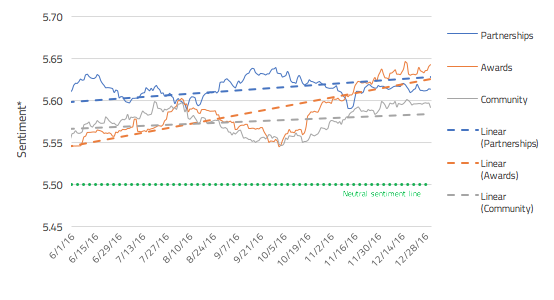 Figure II shows that coverage volumes increased for each of the three issues in the six months leading up to 2017. This indicates that the issues are getting more exposure and thus there is the potential to leverage them for positivity.

Partnerships was one of the most positively impactful opportunities for the sector, with a strong upward average trendline and where all companies analysed averaged above the neutral sentiment score. Nevertheless, Tesco, Sainsbury’s and Asda outperformed the sector average, with Tesco the leader.

Partnerships with food and drinks suppliers and delivery services were the general drivers of positivity throughout the sector, with focus concentrating on supermarkets increasing their product lines and “boosting offers” through their supply deals. On the other hand, Tesco differentiated itself from the sector by partnering with British dairy farmers. The retailer was praised for supporting local farmers by offering a “fair and consistent” pricing model.

Community was the second emerging opportunity for the sector as coverage highlighted supermarkets’ efforts to engage with local communities. It had the weakest average trendline increase as it is an established component in the wider strategy for most companies.

Tesco generated the largest impact, through initiatives such as “Bags of Help”, “Neighbourhood Food Collection” and installing Defibrillators in over 900 stores. Amplification of these stories through social media channels boosted positivity for the retailer.

The average trendline for this issue saw the greatest increase, but this will be related to coverage of end of year awards. However, this issue did generate the single highest peak for sentiment of the three analysed which shows the potential for positivity.

Aldi was the leader in terms of awards, generating consistent positivity throughout the year. The retailer was praised for the international awards won by its own-label wine and spirits, with media encouraging customers to purchase these “great products” as 41 products were “honoured with food and drink awards”.

It is often the case that the brands with a reputation for lower prices can generate most positivity around award wins as they challenge perceptions of the brand and consequently receive more media interest.

How were supermarkets perceived for pricing?

We have seen that the supermarket price war was one of the major topics driving public discussion and overall negative sentiment for the sector. However, from the companies analysed, the top 5 performers generated sentiment above the 5.50 neutral point.

The majority of the top 5 brands for sentiment around pricing, generally compete on budget pricing. They won positivity around discounts, with the media discussing which supermarkets offer cheaper prices during the price war.

Aldi differentiated itself from competitors by combining low prices with evidence of quality through the recognition surrounding its award wins. It also successfully promoted executive messaging relating to pricing, as UK national and trade media praised the retailer after Matthew Barnes “promised” that Aldi will keep cutting prices to ensure that it stays the “cheapest grocer” in Britain.

These messages mitigated negativity around the supermarket facing a “slight dip” in profits later during the year. This is an important point, as poor financial results drove the largest amount of negativity for the brands which performed worst for pricing.

However, the fact Waitrose ranked third for pricing shows that it isn’t just a race to the bottom when it comes to this issue. While it did make an effort to promote its essential range, discounts and competitive pricing for established brands, the supermarket also received positive media coverage around its quality, respectable provenance, attention to detail and shopping experience, a strategy that increased its share of the market while the “big four were all in decline”.

There have also been recent reports that demand for organic products is at the highest point for a decade, with a Waitrose spokeswoman revealing the company’s “latest figures show year-on-year growth of around 5%.” This indicates that supermarket consumers are willing to pay more for a perceived increase in quality.