Labour leader Jeremy Corbyn has been under increased pressure since the UK vote to leave the EU led to mass resignations from his shadow cabinet. Many in the party wanted to remain in the EU and Corbyn was criticised for not taking a stronger pro-Remain stance during the campaign.

In the aftermath of the vote, Corbyn’s sentiment ranking plummeted to its lowest point over the past 12 months. It has gradually rallied since then, but during this time his Labour rivals have been organising their challenge and now Owen smith has emerged as the challenger for the leadership.

To get a deeper understanding into how positively both candidates are viewed by the general public, we turned to our media content analysis system to review over 130,000 pieces of publicly available UK content across mainstream and social media.

Figure i: Sentiment trends for Jeremy Corbyn and Owen Smith 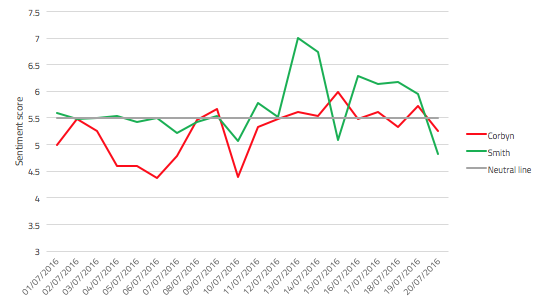 The graph shows that Corbyn’s sentiment was generally running along the neutral line, which is quite impressive for a politician under such pressure. In fact, the main dip in Corbyn’s recent sentiment trend came on July 10th following speculation that Angela Eagle would announce a leadership bid.

Just over a week later, it was announced that Eagle would stand aside and back Owen Smith as the single challenger against Corbyn. This announcement did see a slight dip in sentiment towards Corbyn, but this was much less pronounced than that which followed the Eagle speculation.

If we turn to Smith, it initially appears that he is well placed to challenge Corbyn, as his sentiment is on average 8% higher over the previous fortnight. However, since the announcement he would be the main challenger, Smith’s sentiment has fallen 19%. A lot of this negativity is concentrated around increasing scrutiny on his relationship with big business and NHS privatisation, due to his previous positions as a lobbyist at Amgen and Pfizer.

What may be even more worrying to Smith, is that his sentiment is 9% lower than Corbyn’s on the same day that Corbyn has been widely criticised for a poor performance in Theresa May’s first Prime Minister’s Questions (PMQs). This was seen by many as an opportunity for Corbyn to display his leadership qualities and put pressure on the new Prime Minister.

Instead it was widely acknowledged that May had comfortably won this exchange, with “brutal” being a recurring phrase to describe her performance. Corbyn’s challengers will have hoped that this poor performance will help turn public opinion against him, but the immediate response does not seem emphatic.

This drop in sentiment following increased scrutiny after a rise in prominence is not exclusive to Smith. We recently saw a similar situation when Andrea Leadsom was set to challenge for the Tory leadership, before withdrawing due to hostile coverage. 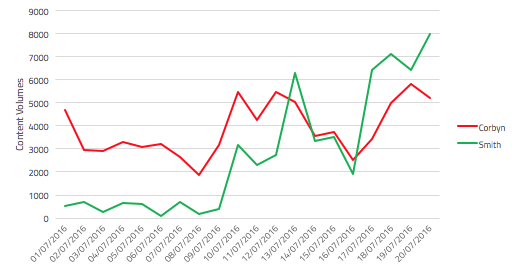 Figure ii shows the difference in visibility for Smith once he took centre stage in the leadership race. We had previously seen how Theresa May’s low profile during the Brexit campaign benefitted her sentiment as she was not affected by the bitterness directed at some of her more visible rivals. Smith’s previously high sentiment could also be due to less scrutiny, so there is where his challenge really starts.

Smith’s sentiment is similar to Leadsom’s when she withdrew from the race. However, the coverage levels will soon stabilise and he still has time to turn opinion around if he can improve positive communications around his agenda. Labour have seen more than 180,000 new registered supporters in 48 hours and many will not be as familiar with Smith as with the incumbent leader so this is a crucial time to mitigate the criticism and get his own message across.