In January 2017, the telecommunications company Sky launched its environmental campaign, Sky Ocean Rescue. The campaign aims to take a stand against litter with a focus on how this is damaging our seas, its inhabitants and in turn, us. Sky’s approach has been to focus on the environmental damage caused by waste plastic. The driving force behind this comes from advocacy of a Drink Return Scheme (DRS). A UK DRS, if similar to that of Norway’s, would mean a standard 500ml drinks bottle would cost 10p more but then this would be returned to the customer if they returned their empty bottle to the shop or a recycling station.

A policy of this nature would put pressure on FMCG companies that produce drinks in plastic bottles as higher prices would likely affect consumer habits, irrespective of the return scheme. Moreover, as the campaign grows with endorsements from high-profile figures such as Richard Branson and Prince Charles, FMCG companies could face major reputational backlash if their response is not managed appropriately.

alva recently sought to gauge the impact this campaign is having, and may continue to have during 2017, on the reputation of the bottled drink manufacturers, along with insight into how a bottled drinks company could best use this campaign to increase its own company reputation. This blog aims to answer the following questions:

How could environmental issues affect the FMCG industry in 2017?

To get a longer-term view on how environmental issues (such as litter, recycling and pollution) have been affecting the bottled soft drinks industry, alva’s content analytics system collated all UK content relating to this issue, across print, online, social and broadcast channels.

Figure I: Volumes of content related to bottled soft drinks and environmental issues in the UK.

As you can see from Figure I, January 2017 received more coverage relating to environmental issues than any other month in the previous year. February 2017 also generated a significant amount of coverage for these issues, ranking third behind May 2016. The trend line indicates a gradual increase in coverage for these issues and if this continues throughout 2017 then the Ocean Rescue initiative could push environmental practices at bottled drink companies further into the public eye.

What is driving the Sky Ocean Rescue coverage and what can FMCG companies do?

While the campaign has promoted waste management solutions such as reduced food packaging or improved household recycling, it is obvious from Figure II below, that these are dwarfed by the campaign’s push for a DRS. Therefore, as the campaign is clearly centred on implementing legislation that would impact them, it is of upmost importance for bottled drink manufacturers to understand what is driving the content behind Sky Ocean Rescue. Especially if they want, or even need to engage with it. 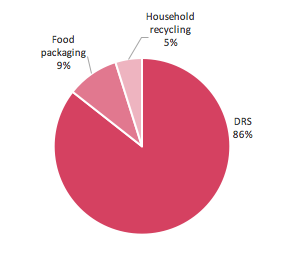 Throughout the campaign so far, four main environmental issues caused by plastic waste have been highlighted to drive coverage:

alva sought to determine which issue had successfully generated the highest traction in terms of volume since the start of the campaign. 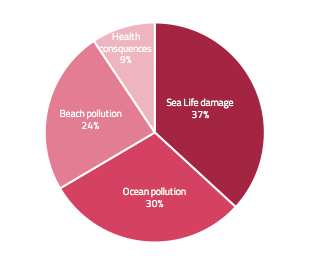 As you can see from figure III, the damage caused to sea life has received most coverage, followed by the increasing levels of plastic in the ocean and on beaches. The health consequences towards humans of high plastic levels in the ocean was the issue generating least concern.

This would suggest that any company wishing to visibly embrace the Sky Ocean Rescue campaign could get favourable coverage if it focuses on how its actions are benefiting oceanic wildlife. Also, initiatives around reducing the amount of plastic in the ocean and on beaches, whether removing what is currently there or reducing the amount being added, also has the potential to be a reputation opportunity with stakeholders.

A lot of the initial attention around the Sky Ocean Rescue initiative focused on Coca-Cola, with the brand receiving significantly more mentions than any other bottled drinks company. This was due to a leaked document in which it was reported that Coca-Cola was opposed to a bottle deposit scheme being considered by the Scottish Government.

The company initially responded to the leaked documents stating “the scale of the investment that would be required to roll out a DRS, and the lack of evidence that it would deliver any significant reduction in litter, means a DRS is not the right solution to the litter problem in Scotland at this time”.

Consequently, in January 2017 Sky Ocean Rescue content caused Coca-Cola’s social performance sentiment score to decrease by 23%. With all eyes on Coca-Cola, there was the very real danger of the company becoming the negative “poster-child” for the subject. There was the potential that any time this initiative or similar environmental concerns were mentioned in the media, Coca-Cola would be the brand constantly referenced as opposed to an apparently humanitarian scheme, resulting in the company being the focal target for supporters of environmental issues.

It was therefore crucial for Coca-Cola to respond intelligently to successfully mitigate negativity and protect the company reputation, or risk another company “stealing” the role of a positive DRS advocate.

We have seen the danger of a company being slow to react around an important issue. In 2015, Thomas Cook was faced with criticism around how it handled an inquest into the deaths of two children in a hotel booked through Thomas Cook; insofar as its executives refused to apologies for the incident. alva consequently found that this approach catalysed the issue’s volumes and drove its lifecycle over a much longer period. Concurrently, Thomas Cook’s shares dropped -12.77%.

Coca-Cola was at a point where they could ignore the issue and potentially become the main target of the campaign, or respond and own the issue, using the coverage as a way to shine a positive light on the brand.

However, the company quickly moved to revise its position, saying “it’s already clear from our conversations with experts that the time is right to trial new interventions such as a well-designed deposit return scheme for drinks containers”.

This change of strategy has already been greeted positively by those pushing the agenda, giving them an apparent early victory, while allowing Coca-Cola to establish itself at the heart of the matter and position itself in a positive light around environmental initiatives. In a purely business sense it may be the case that a DRS could negatively affect sales, however as we saw with Thomas Cook, reputation can have a physical effect on shares causing more long-term damage both reputationally and financially.

We have seen that 2017 has the potential to be a year of high visibility around environmental issues and plastic waste in the bottled drinks industry. FMCG companies could therefore find themselves under pressure to take a stance on the issue, either following Coca-Cola’s lead and backing the campaign or risking becoming the target of negativity by standing against it.

We found that the most prominent concern around this theme was reducing the damage done to marine life, meaning a company could generate good advocacy by focusing on this issue. Moreover, visibility would be improved further by considering ways to reduce ocean and beach plastic waste. Therefore, acting quickly and effectively could prove a drinks company’s best chance of mitigating the potential negative financial effect a DRS could have.

If you’d like to find out more about how alva can help your company measure how issues such as pollution affects how key stakeholders perceive your brand, please contact our Consumer team today.

What does the Coke Life failure reveal about consumer perceptions?

Did sponsorship of the Olympics or Paralympics give greater returns?