Over the past six months, alva’s analysis of the defence sector has seen an increase in competition among manufacturers positioning their organisations as focused on cyber security. In November 2015, Chancellor George Osborne announced the government’s policy of cyber investment, aiming at increasing the UK’s cyber capabilities as part of the UK Spending Review, whilst emphasising the Paris attacks and the international threats nations face.

Defence companies play a key role in this debate as they are the manufacturers who build cyber security technologies in order to meet governments’ and private companies’ goals to tackle threats.

In light of this apparent sector-wide positioning, alva used its comprehensive monitoring and analysis platform to investigate how this trend has developed and indeed which companies were leading the way in this domain and why.

Is cyber security an increasingly important driver of brand sentiment and visibility for defence companies?

Figure II shows that over the past six months, coverage around cyber security has increased. Cyber security is at the centre of the general discussion around countries’ national security, and “keeping nations safe from terrorist attacks”.

This presents an opportunity for defence companies to bolster their corporate reputations by creating cyber security advancements which help governments protect their people.

Looking in more detail at the companies tracked within the defence sector, it is clear that two organisations were particularly successful at generating positive sentiment on this issue, BAE Systems and Thales.

The graph below is an index of ten of the largest defence companies in the world, ranked in order of brand sentiment for the period December 2015 – May 2016. 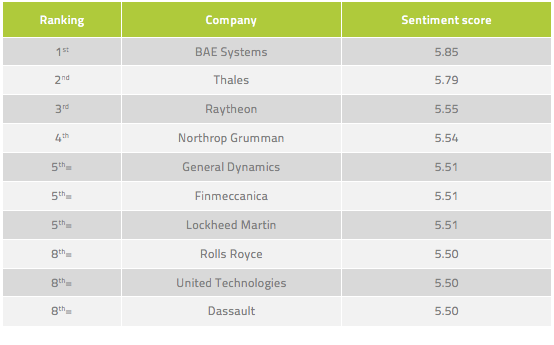 BAE Systems topped the sector for cyber security for the period with coverage increasing 450% during March 2016. One of the main catalysts for positive brand sentiment was blog content published by BAE Systems, with its findings on the Bangladesh central bank cyber-attack, helping to increase third party engagement around the issue. Moreover, the company received extensive positive coverage from international media sources emphasising how its cyber security solutions safeguard the global financial system.

Thales ranked second in terms of sentiment for cyber security despite ranking fourth in terms of overall visibility. The company received positive sentiment in both trade and social media which represented 24% and 7% of its overall coverage respectively. Messages around the company investing in cyber security solutions to tackle increasing cyber-crime in the Middle East boosted Thales’ sentiment. A significant driver of brand sentiment was the company receiving an external Common Criteria Evaluation Assurance Level certification for its cryptographic technologies.

Raytheon ranked third whilst also generating the highest visibility. Communications focused around partnerships and sponsorships as Raytheon partnered with regional entities, including the Khalifa University, to tackle the increasing issue of cyber-crime in the UAE. The company also emphasised its plan to launch a Cyber Academy to help create the next generation of cybersecurity talent. Positivity increased due to messages around Raytheon awarding Women’s Cyber Security Scholarships, aimed at “giving them the opportunity to make an impact”.

The media content analysis clearly proves that cyber security is increasingly important for defence companies, both operationally and in their communications strategies.