Long before the pandemic generated an existential crisis in a number of long-established industries, the Professional Services sector had been facing a significant reputational challenge of its own: audit quality.

The investigation into Carillion’s collapse in early 2018 generated high-profile criticism, with Rachel Reeves, chair of the business select committee, commenting: “These audits appear to be a colossal waste of time and money, fit only to provide false assurance to investors, workers and the public”, while a number of inquiries and investigations have been launched in response.

In this blog post, we assess the extent to which audit firms are discussed as a homogenous entity, or whether their work and their proactive efforts to engage in the debate have resulted in differentiation. We also seek to unpack the risks firms face by being associated with the sector, as well as the opportunities there are to leverage or to address any perceived areas of comparison between firms, whether good or bad.

We can observe in Fig. 1 that while the beginning months of 2020 see discussion recede, by mid-year the volume of not only overall reporting, but particularly negative coverage builds beyond that of late 2019. The BEIS Select Committee Future of Audit study, the Kingman review and the CMA formal market study into the statutory audit sector among others through 2019 drove significant discussion, while this year the results of the FRC’s audit quality review and announcement that auditors have until 2024 to build Chinese walls between their audit and consulting businesses were key factors.

Figure 1. Volume of audit discussions over time, split by sentiment

Even with Covid dominating the news cycle for the majority of 2020, reports of issues with audit quality are still able to break through, demonstrating both the continued media and wider public interest in reports of perceived wrongdoing within the sector.

This is clearly an issue that is not going away.

Separated from the pack

So while the subject of audit quality remains front of mind, is there any material difference in the way in which any of the professional services firms are perceived?

While each of the ‘Big 4’ firms has experienced its own standout issues – from PwC’s fine and partner ban relating to work on BHS; KPMG’s oversight of overvalued stock for Ted Baker; to Deloitte’s recent record fine relating to historic audit work on Autonomy – it’s clear that for significant periods these trends very much travel as a pack.

Figure 2. Sentiment trend for each firm over time. 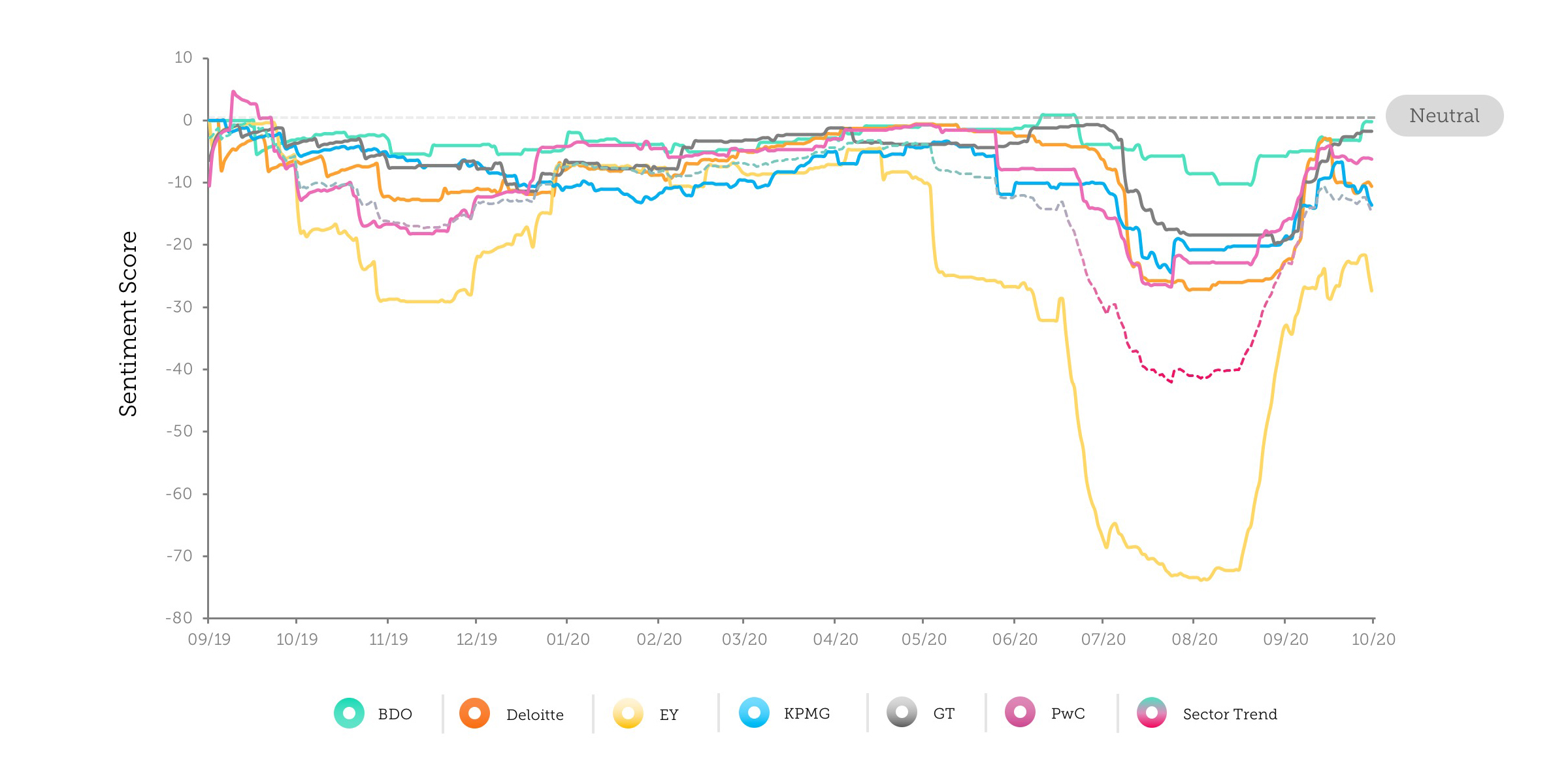 What’s also clear is the extent to which EY finds itself negatively differentiated within discussion.

As is visible in Figure 2, Wirecard’s insolvency in June 2020, following revelations that $1.9 billion was “missing” from accounts quickly generated discussion of possible malpractice by long term auditor EY. This sentiment gap by comparison to EY’s peers is also visible several months prior to the Wirecard story breaking, in discussion of EY’s audit work for collapsed travel agent Thomas Cook, and accusations from a BBC Panorama programme that EY had ignored a whistle-blower.

What’s most striking from the graph, however, is the negative reputational spillover effect we see.

When one firm faces a reputational hit, the rest are tarred with the same brush, seeing knock-on declines in their own perceptions. This pack movement and lack of company differentiation is one of the hallmarks of a sector facing persistent and acute reputation risk (see also Big 6 energy firms and Big Pharma).

This point is reinforced by the fact that smaller firms BDO and Grant Thornton fare more positively than the ‘Big 4’.

Assigning an overall sentiment score for each firm for the period, on a scale of -100 (most negative) to +100 (most positive), we see that the relative positions resolve as below:

Figure 3. Overall sentiment score and sector ranking for each firm in the period.

While BDO has driven positivity through a growing number of audit engagements for listed clients; an associated uptick in revenue; and its appointment by the FCA to assist with Wirecard monitoring, the chief reason for it and Grant Thornton’s better scores is their overall lower visibility within a negatively-perceived sector and their much lower profile on the subject of audit quality.

In a sector that is so frequently and vociferously criticised, absence of negativity may often seem like the best possible outcome for firms.

While maintaining a lower profile may be an option for some, it’s not a realistic long-term approach and doesn’t address underlying stakeholder concerns with audit quality.

While there are numerous examples of great initiatives being undertaken in the sector, from PwC’s leadership in employee (and internship) support and the return to work debate, to Deloitte’s leadership in Technology and KPMG’s success in advisory engagements, these are being overshadowed by the aforementioned audit concerns.

What’s clear from the data is that the audit quality debate has shifted gears from a periodic recurring issue to a significant, persistent reputational challenge, affecting all players in the sector. Unless proactive steps are taken by its firms, the professional services sector may lose the support of its key stakeholders from regulators to governments to future talent, and the decision as to how they resolve this challenge may be taken out of its hands.