Media coverage of the ‘Big Six’ Canadian banks in 2020 was dominated by their responses to COVID-19. This encompassed community-focused initiatives, including donations and financial relief for customers, as well as internally focused work such as employee safety. As the year progressed, as well as continued coverage of the banks’ responses to the pandemic, we also saw the issue of racial inequality increase in visibility in media coverage, specifically focused on the banks’ actions in the aftermath of the killing of George Floyd and the increased importance of the Black Lives Matter movement in the US.

As 2021 progresses and – fingers and masks crossed – we begin to turn the COVID corner, we will start to see a return from a communications perspective of the core platforms that have dominated sustainability over the preceding years – though of course informed by the seismic events of 2020, the increasing importance of stakeholder capitalism and the emergence of ESG as a key management framework. It is also important to note, particularly in the banking sector, that this increased focus on ESG encompasses each bank’s own activities and its investments as well as those of its supply chain.

The importance of climate

Climate change represents a singularly important reputational driver. In alva’s index, we saw a threefold increase in media coverage of the topic in the three years from 2017-2020. To triangulate this, in a ten-year period, Google searches for climate change doubled – having increased fivefold in the preceding five years.

With an eye to this future, this post aims to highlight the specific climate change-related areas that represent opportunities and risks for Canadian banks. Specifically, I want to share which specific aspects of climate change are most impactful from a reputational perspective, and where there is divergence between the reputations of the Big Six.

The six elements of climate change

alva looked at media coverage and social media commentary from Q3 and Q4 of 2020 on the topic of climate change in the context of the Canadian banking sector. We identified the key climate change-related themes for the sector and determined which of these were most related to the reputation of each of the banks we looked at (Bank of Montreal, CIBC, National Bank, Scotiabank, RBC and TD).

We found six major themes (naturally, these overlap to some extent):

These are ordered above in terms of their influence on the reputations of the Big Six; they vary quite widely in their impact. Arctic drilling is by some distance the most important; on average, 40% of each bank’s climate change-related reputation was determined by this topic. Carbon emissions, renewable energy and green bonds are each responsible for 19%, 16% and 13% respectively, while fossil fuels and net zero are less impactful reputationally.

Where banks are tied

In terms of how the banks are perceived on each issue, there are three areas where the sector performs broadly evenly: renewable energy, fossil fuels, and net zero. Examples of some of the initiatives being covered here include the funding of smart technology suppliers, Sustainability-Linked Loans (SLLs) and restrictions placed on lending to new coal-fired power generators and certain types of coal mine.

Conversely, arctic drilling – specifically related to the Arctic National Wildlife Refuge (ANWR) – is one of the issues that separate the group. While by the end of the year there was widespread refusal to provide financing for, or advise on, the exploration, development or production of oil and gas in the arctic circle, the reputational scores for each bank are markedly different. These scores are largely related to the timing of their rejection of drilling efforts in the ANWR, with some banks moving quicker than others. 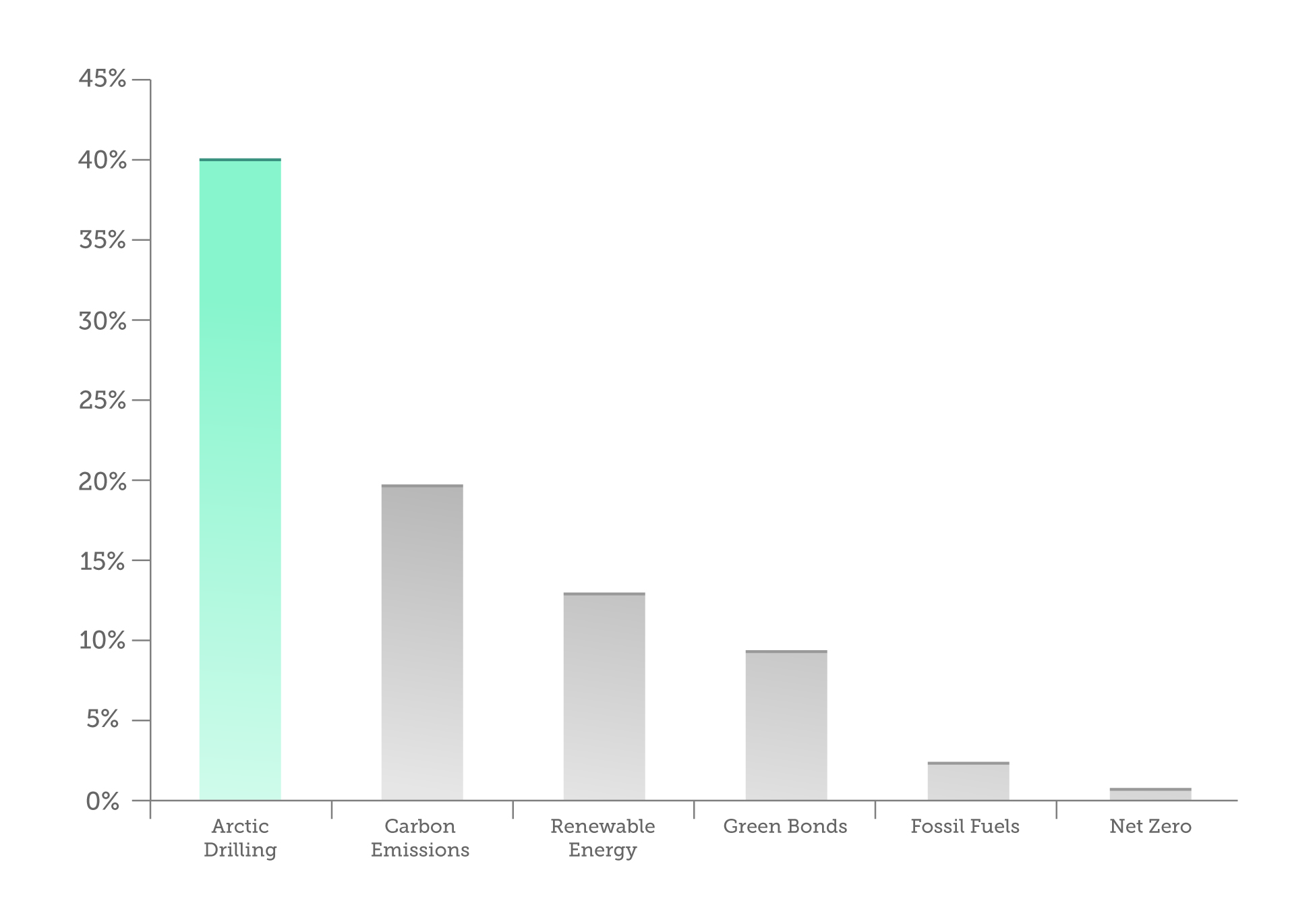 To a lesser extent, the issue of green bonds also separates the sector, as does that of carbon emissions; there is coverage of  programs to help finance municipal renewable projects, while financing for energy efficiency retrofits and solar panels also feature prominently.

In summary, as the communications strategies of the major Canadian banks start to turn slowly back toward non-COVID initiatives, the topic of climate change is one where there is significant difference not only in the reputational impacts of each of its constituent themes, but also in terms of how each is bank is perceived. It’s critical for each bank to know at a granular level what those strengths and weaknesses are.